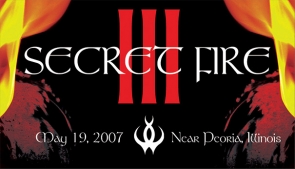 an outdoor event near Peoria, Illinois

Gotowww.chilluminati.orgfor more info and tickets on this exciting event!

The Chilluminati are in our third year of Illinois outdoor psytrance under the Secret Fire banner. The Fire dances in the psychedelic sonic landscapes we create.

Our music is dusk to dawn and beyond, both Trance and Chill/Psyambient, and takes place on one stage. Trance is Dance. Chill is melodic and softer, and creates a relaxing and peaceful mood. Chill . . . is . . . Psyambient, Downtempo, IDM, Ambient, Techno, Dub, Breaks, World, and Future Sound. The tempo we will play will change by Time of Day . . . following an Arc of Intention toward a crescendo of psychedelic madness, then back down to the morning light.

Our projection art is visual semiotics; a re-interpretation of experienced symbols and color, cast through the artist’s vision and refracted as a calligraphy of light. Our deco creates the space and the corridors for the participants’ own life ritual, our life as we pass through the flames of rebirth.

We are an Intentional Community, meaning that everyone is an Artist and Active Participant, not spectators. Our events are clean and based on Respect and creating a more beautiful life for each participant.

Scroll down for much more info on artist lineup, venue, and more.

META is the psychedelic trance project of Aeon La France, trance mastermind since 1999. Host of psytrance radio show “Highway 604”, he has hosted many parties at Santa Cruz’s legendary Trance Mansion and has much gratitude and love toward all the Bay Area DJ’s who have helped shape his style.

His music ranges from melodic morning tracks to hard-edged night-time stompers – he has released several singles on GeoMagnetic Records compilations, a collaboration track on Mubali’s debut album, and now his own debut full length album “Ekstasis” is set for release on GeoMagnetic/Darkstar records in April 2007.

Chuck Looper (AKA FaceHead), is one of those “saved by psy-trance” stories. Shortly after breaking free from a tarnished past a friend took him to his first psychedelic event in 2002. It changed his life. Since 1998 Chuck had been djing and producing his own blend of noisy experimental electronic music. After that first party, he went home and immediately started working on his first psy track. Since then it has been an obsession. Constantly searching for the most unique and bizarre sounds, FaceHead brings a style all his own that will leave you stomping away with question marks over your heads. You can expect dark and full-on with a wide variety of influences. Look for upcoming releases on Geomagnetic and Anomalistic.

The Primordial Ooze project was created by DJ’s Kaiser Soze and S.O.T. as an experiment in genetic sound programming and nano-acoustic engineering. Self-replicating and mutating algorithms, swarms of frequencies that collaborate, breed and communicate, flourish in an environment of artificial selection and continual evolution. Currently working on two albums this energetic live act is continuously expanding their farm of pet-frequencies with various sonic creatures. These lively pets can cause serious mayhem on the dancefloor! But with properly tied shoes, participants are generally safe and happy.

Dave recently pre-ordered a Jason Varitek action figure and spent too much on shipping. He threw away his cell phone two years ago and now prefers endmills to emails. He has a profound appreciation for the music of Iboga Records and the city of Boston. Two ninjas guard his two prized jade plants and his one pair of sox. He bleeds deep red. People usually smile when they hear his name and say, ‘Dave? He’s like 75% baseball fanatic, 50% philosophy-geek, and 99% percent PROG-HEAD.’ (Not all his friends failed high-school math, though.)

Professor X started djing electronic music in 1998 when he was going to one of the top audio schools in the country, and started DJ’ing in Orlando, Florida, playing at bigger clubs like Hard Rock Live and The Groove. Soon after meeting DJ Zero Six in his hometown in Illinois, he discovered psytrance and became a core element of the Trancepsyndicate. He has played at parties such as the Cosmic Outset, Earthdance, and the Apsylum for the Unsane.

After traveling around Europe collecting vinyl, Derby was introduced to the melodic and twisting sounds of psychedelic trance. Later he met up with Kri and became a member of Asheville NC’s TOUCH Samadhi. One day Derby woke up in Chicago, IL. Now he is a prime psytrance vector, infecting the Midwest with his sound. Through international mail-order, Derby constantly updates his collection of morphing multi-layered psychedelic trance. In love with the music and the dance floor, Derby delivers the sounds and energy to the ears and minds of those “tuned in” and “turned on”.

Robert Houchin aka Mr. Roboto is a force majeure to full-on morning trance. Starting out in various garage bands, he yearned for something more. Something crunchy. When he stumbled upon the Trance Psyndicate in their underground bomb shelter sessions, he immediately knew where he wanted to take his music. Originally from a one-horse town in central Illinois, he now resides in big-ass Chicago, and has been rumored to be working on original material in the studio.

Poised mischievously between Light and Dark, KT toys with full-on midnight mayhem while beckoning the melodic morning to come closer. She intertwines the energetic edge of the night with the uplifting beauty of the daylight-pulsing one into the other-and weaving the two into an intricate dance of celestial balance in order to create the soundtrack of your psychedelic life.

Robyo was born and raised on the wrong side of the tracks in badass Rockford, where he played bass in several well-known punk and hardcore bands. At the age of 21 he moved to Oregon state and discovered electronica. While in the Pacific Northwest, he learned to play the djembe and didjeridoo, but now he is back in the Midwest with a vengeance. Robyo’s style is analogous to the ocean’s tides where tempo, density and color sway though time and a divine oscillating influence. An avid fan of psychedelic production techniques, he prefers tribal, dub, ambient and trance soundscapes.

With over a decade of mixing experience, Kent Vogel has defined a very unique style of uptempo chillout which is a perfect compliment to psychedelic culture. Having been involved in the electronic music scene for many years, it was only a matter of time before his presence would be made known within the Trance Psyndicate and to The Chilluminati. Soon, the entire planet will feel his chill iron grip, squeezing HARD . . .

Trained since she was a girl by the Bene Gesserit sisterhood, Shai is now a DJ, medical and Ayurvedic doctor, producer and founder of the Divine Balance label. Her Indian fusion electronica is changing the planet. Her beats pry your Third Eye open with a sonic crowbar. Boom shanti!

Yidam… Recently returned from India, Chillumafia don charsibaba’s sound is about BALANCE. Mixing beatless atmospheric music and glitchy IDM, he creates space and time that transcends thump. Integrating organic instruments into the mix adds a live element to his music which is specifically used to send listeners on one long float through the stratosphere.

For the first time… Psymbolic and Mason Dixon will be collaborating live visually. These aesthetic developers are major VJ/Visual scene cultivators, visual curators of past Entheon events, and organizers of the annual multi-day Chicago Motion Graphics Festival. They have a dual display setup in design and will be working with Natural/Designed/Hybrid visual elements.

This catalytic duo (Julee & Troy) create Live Interactive Visual Environments. Since 1999, they have become large-scale A/V event curators and they continue to push their means of expression through their video compositions and the real-time surrounding spectacles. Psymbolic is always providing a customized thematic projection / performance of synchronous moments of meaning and inspiration.

Mason Dixon aims to reawaken a sense of wonder about one’s environment. The goal is to revitalize the viewer’s perception and attention to detail. No hidden meanings, Just reaction, contemplation and a search for meaning. The reflection will reveal your personality and the nature of your sensibilities.

Bringing the global to the local – Dimitry distills the essence of magic in his chill installations at Chilluminati events.

Tickets and Promotional Support by PSYMBOLICwww.psymbolic.com

Web publishing and promotion, memetic engineering and other acts of besotted depravity by The Fixer

Phoenix Traders is Rockford’s imaginatively spirited importer of fine handicrafts and artifacts from planet Earth. We directly support the artisans with the belief that trade is a two-way street. We practice Fair Trade and we are constantly seeking products that enrich and improve the quality of life for both the artisans and purchasers of our offerings.

You can build a campfire, check with Chilluminati staff for locations. Buy or bring your own firewood. Wood will not be available for sale at the campground.

Snacks, beverage, cigarettes, water, and hookahs will be available via vendor Smoker’s Den.

This is not a “show”. This is a TRIBE. Participate! Do something, Make something.

Whatever Performance, Art, Design, Clothing, Construction, Demonstration, Evolution, Oscillation, Vibration, Creation, Increase, Love, Understanding you can bring to this, is what needs to be brought.

Participate freely, come and bring whatever you can and must to make this village a more beautiful place.

More ways to get involved @www.chilluminati.org

The Chilluminati ~ Bringing Psychedelic Sound, Art and Community to the Midwestern US