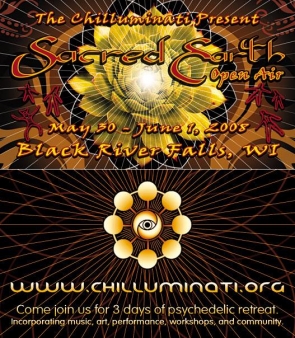 Mubali is the trance project of Greg Farley. He has been producing and releasing psychedelic trance since 2003 and has several releases on various labels including Mistress of Evil, Trishula, Parvati, Insomnia, and Psycircle Records. His style varies from being slightly funky to slightly mental, but his hard hitting sets have reached some of the far corners of the globe. His second full length album titled Shenanigans, will be released this fall on Trishula Records. Currently based in San Francisco, he also has spent some time in the midwest with the superduo Primordial Ooze. Get ready to blast off with Greg’s interpretation of hard psychedelic madness with a little twist of funk.

Dragon is David Scruggs, co-founder of Dharma Harmony Records, established in 2007 with fellow trance pal DJ Qog. With over ten years of trance DJ’ing experience and five years in the studio producing, Dragon has gained the reputation for powerful trance sets that give a strong dose of organic and synthetic fusion. Performing his first live set at the AUM Festival in 2007, David has been working relentlessly on new material for his first album, set for release this summer on Dharma Harmony. He has a particular style of trance that embraces dark basslines and edgy leads which tear through the mind, exposing the primal core inside. Dragon has performed Coast to Coast alongside artists such as Electrypnose, Artifakt, Deviant Species, Naked Tourist, Scorb, and Pondscum just to name a few. When it comes to full-power psytrance, Dragon will leave you scorched!

Mist is an established veteran of the Texas Psytrance scene. After playing in bands his entire life, he moved on to DJing and the production of electronic music in 1997. It was during this time that he co-founded the seminal Texas Psytrance production company, Mistical Productions (1997-2007). Over the years that followed, his flawlessly mixed high-energy sets left dance floors across North America quaking. After a brief stint as an Inpsyde Media label DJ, he joined forces with Acidance Records. For them he compiled the two very successful releases, Dirty South and A Violent Reaction. His original electronic productions are currently being constructed under the name “justincaseboy”.

The musical palette of Aligning Minds includes jazz, classical, techno, breakbeat, drum and bass, industrial and more. For simplicity’s sake, we’ll refer to their collective sound as “intelligent dance music,” or IDM. They are more ambient at times than IDM pioneer Aphex Twin, and more beat oriented than much hyped DJ Shadow. Unlike the other acts on 88’s floor at Love, Aligning Minds are not “DJing” — they do not spin other musicians’ records. Rather, they create and then perform live electronic music by programming, synthesizing, sequencing, and the live manipulation of sounds and beats. Their music is a testament to computer nerds everywhere.

Its hard to write about electronic music and not mention blips and bleeps at some point. And granted, Aligning Minds have glitchy blips and bleeps in abundance, but they also bring to the mix various natural sounds — guitars, pianos, chimes, tablas and human voices, to name a few. Moreover, even the non-organic technological elements of their songs have a musicality to them that transcend the usual jargon. Most of their songs start sparsely, while slowly adding and subtracting elements in a way that creates a simultaneously alienating and sensual sound. Their songs are layered and textural epic journeys, never ending quite where they start out.

If you let it, there is a certain trance-inducing quality that occurs when listening to so many elements at once.

Shaped by a “Do It Yourself” culture, Jeffrey Acciaioli was driven by his love of music to create the moniker The Great Mundane at first to only satisfy himself. Born and raised in Farmington Hills, Michigan he was exposed and later influenced by genres such as classical, jazz, bossa nova, hip-hop, and electronica. His broad range of favorites and training allow us to enjoy his “one of a kind” sound that is anything but mundane. The Great Mundane’s twisting textures, catchy drum whips, and unique soundscapes leave us with a melodic collage that is unlike anything we’ve heard before. The Great Mundane was first introduced into the Chicago music scene before taking his passion and energy nation wide. Soon international ears were falling upon his unique sounds and requesting his talents. Recognized and appreciated by his untraditional sounds, The Great Mundane worked with Belladonna Records to release two limited time EP’s and has released his debut album “When Falls Arrive” with Psymbolic–sounds.

The Primordial Ooze project was created by DJ’s Kaiser Soze and S.O.T. Flowing sounds that seem to bubble and evolve like primitive life forms. These bundles of frequencies collaborate in a swarm like manner, creating intelligent patterns and movement. The Ooze sound creates a unique twist on the ever changing sound of psychedelic music.

Mindoutpsyde productions works to bring Psytrance and Goa Trance to Iowa and the greater Midwest through event organization and promotion. Live DJ acts, fire and interactive blacklight performances, visual art displays, and relentless presence on the dance floor throughout almost any party in the Midwest. The Psyowa Invasion is a fusion of the original Mind Outpsyde crew who intend on taking over the world, one party at a time.

The Paka Paka Lightshow consists of the father & son team Jerry and Reuben Fortier and long time collaborator Dale Kaminski. In 1968, Fortier founded the Eyes of Khamphalous Lightshow in Madison, WI. As the visuals behind the Broadway production of “Warp” and the resident lightshow for the Melkweg and Paradiso clubs in Amsterdam from 1969 to 1972, the Khamphalous Lightshow created a unique psychedelic visual experience. The Paka Paka Lightshow brings this experience into the digital age.

Growth Workshops organized by EKLYPZ – get involved at the Chilluminati Forum

Sound by Nuclear Subs, PMLA, with special thanks to Rexroat Sound

The Smoker’s Den provides all-you-can smoke hookahs for the weekend at no extra cost. (18+ only!) In addition to hookahs, you can also buy various artwork from regional artists, hand made pieces, music, soft drinks, snacks, glow-things, and who knows what else. Stop in, relax, and have a smoke!

Phoenix Traders is Rockford’s imaginatively spirited importer of fine handicrafts and artifacts from planet Earth. We directly support the artisans with the belief that trade is a two-way street. We practice Fair Trade and we are constantly seeking products that enrich and improve the quality of life for both the artisans and purchasers of our offerings.

(no registrations can be accepted before that time).