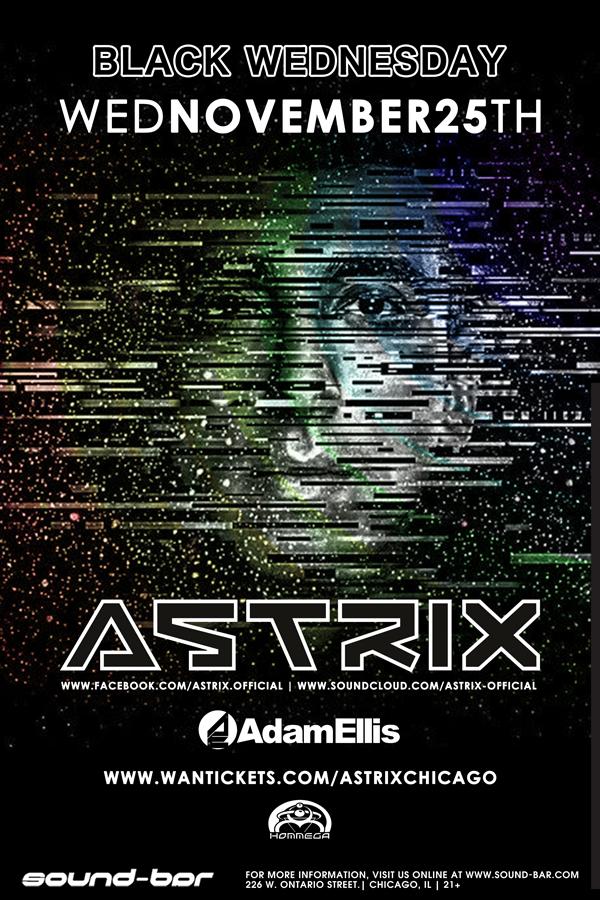 One of the pioneering psytrance artists of the millennium, Astrix (aka Avi Shmailov), undoubtedly rules the psytrance roots. He has established himself as a Class A artist and it is clearly heard in his unique and melodic music style. Playing live and spinning his tunes around the world has helped him pave his way to the DJMAG top 100 DJ list and currently sitting at No. 41, Astrix is one of the few artists in the scene who really makes big waves throughout electronic dance music and gaining universal recognition.

Born in Russia in the early 80’s, he grew up in Tel-Aviv and began spinning 80’s and alternative music in 1995. Playing the European new-wave stuff and some electro, when he heard Goa trance for the first time, it seemed to him like the right combinations of both those sounds…It just made perfect sense and so ,in 1997, he started making music and in 2002, after releasing a lot of tracks on various compilations, he made his first solo psytrance album, ‘Eye to Eye’ (HOM-mega Records), rated as one of the best albums to date for its superior music production which mirrored his unique approach of finding a fine balance between the chaos of a dance floor and the coolness of at-home listening. In 2004 Astrix headlined a huge bash at London’s Alexandra Palace to mark the launch of his second production album, ‘Artcore’ (HOM-mega Records). Psytrance fans turned up in droves for his huge party, stating that if one man has remained true to his style, it is Astrix! Unshaken by the popular music myths every track in his live set has that special ingredient to get your hands clapping and your body moving for a standing ovation. In his upcoming third album, ‘Red means distortion’, Astrix clearly reiterates his distinguished music production style as he leads the way forward with his soul-shaking anthems which have been instrumental in spreading his sound worldwide.

His live and DJ Sets in high profile gigs including Skol beats (Brazil), Brixton Academy and South West 4 (UK), Gathering (Japan), Pacha and Sessions (United States) and Love Parade in Israel, which have seen him play to over 200,000 people at once, taking them into full-on journeys of the most uplifting echelons of the psytrance world, with a heavy focus on the feelings invoked by the more traditional strains of trance music while never losing site of the groovy element. He cites the likes of Coldplay, Linkin Park and Chemical Brothers as inspirations for the non-trance elements in his music, and it’s this combination of euphoria and funk, along with his faultless, crystal-clear production technique, that sits him head and shoulders above most producers – psytrance or otherwise. Astrix stands out amongst many because what he makes is by no means formulaic dancefloor fodder. It’s clear listening to his music that he is more of a musician and a rare talent indeed.