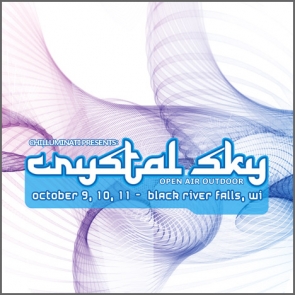 We provide:2 stages of sound, visuals, art, spiritual growth workshops, and amazing community. Warm indoor and outdoor amenities and many beautiful and secluded campsites for a relaxing and energizing gathering before the autumn chill sweeps in.

You provide:a tent, enough food and beverages for the weekend (or some cash – food and beverages will be available for sale this time, we promise), NO GLASS, NO DRUGS, NO PETS, NO FIREWOOD (firewood can be purchased on-site). Please respect the venue by keeping the grounds free of litter. **This is a LEAVE NO TRACE EVENT**

Join us as we bring the 2009 outdoor season to a close!

Tim McCall is firmly regarded as the premiere full on/progressive GOA psytrance producer to emerge in the past decade from the USA. He’s known for creating energetic and atmospheric trance music, although the Jirah name has occasionally been associated with a more downtempo style. Coming from a musical family, he learned many instruments, his favorite being guitar. He grew up listening to a mix of rock and early techno music, experimenting with digital processing from the age of 12. His first exposure to goa/psy music came with the release of the “Blue Room / Trip Through Sound” compilation in 1997, which set him on a direct course into producing his own type of sound. It was during this time that Jirah was born, and over the years Tim’s music evolved as he continued to refine his skills. His debut album was released in 2003 on USTA Records, receiving strong reviews and acclaim worldwide. Jirah’s music has appeared on over 20 compilations from the most respected labels such as Dragonfly, Aleph Zero, Organic, Harmonia and Spliff to name a few. Since his first live show in 2001, he has played throughout the world, from Europe to Asia to the Americas. In 2005, due to a mixed set of circumstances, Tim decided that he needed to take a break from songwriting and performance. His music continued to be released during this time, and after a three year silence, he is back on the scene with new projects on the way. Tim McCall is a signed artist represented as Jirah and Resonant Dawn via the multimedia label known as Psymbolic.

Aaron Peacock (aka oCeLoT) has been producing electronic music since 1993 mostly for himself but with a few releases over the years. In the year 2000 aaron began to release under the name of oCeLoT and vectorSelector since 2003 as well. He lived in San Francisco, California during the late 90′s and early 2000′s and was influenced by the pure family vibes and beautiful parties of the time. Over the years his music has changed a lot, and he explores many sounds from chillout, to minimal, melodic psy, night time psy, groovy psy, even drum and bass! (Neurotransmitterz) He relocated to the European continent in the year 2005 but generally is found travelling a lot to play on parties, events, festivals, anywhere the people want to hear his music.

PhasePhour has its roots from one of the northern peaks of the planet; Norway. Several band members have been involved since the beginning back in 1997. Now the project is primarily in the experienced hands of John Robert Egeland and Eldar von Essen.

Over the years, the PhasePhour project have moved and evolved itself through various musical landscapes.

Nowadays the production is evolving with the massive psychedelic full-on sound, a perfect mix of music to both delight the dance floors and for repeated listening between parties. With numerous releases on major labels like Shiva Space Technology, Geomagnetic Records and Chill Tribe Records and the hit debut album “Boiing & Zipp”, the project has earned its way into the international psytrance scene as the leading project coming out of Norway.

PhasePhour has been around the globe several times with mind blowing performances to packed audiences in Brazil, Mexico, San Francisco and New York City and Scandinavia to mention some.

Christer has earned himself the reputation of being a quite versatile DJ, musically wise- the keyword here being focus and a lot of hard work. There has been a major development in his skills, both technically and musically since his maiden voyage behind the mixer. His DJ sets provide the audience with a wide and exciting arrange of psychedelic trance with one main intension: to make people dance.

Christer is both a label DJ both for Shiva Space Technology and Mechanik Records. He released the compilation “Mental Displacement” march 2006 on SST.

“Psychedelic music is pure energy and raw spirituality – I play it because I love it, unconditionally”

Gatto Matto has been a DJ since 2004, though he is first and foremost an avid dancer and lover of music. He had the privilege of joining the legendary Green Sector collective in early 2005. Since then he has become an accomplished and multi-faceted psy and progressive DJ who can play any time slot day or night, though he specializes in transforming twilight into sunrise. Since 2007 he has been a resident DJ and organizer of Synchronize, the renowned San Francisco club that has the honor of being the longest running weekly psy event in the country. In 2009 he joined the Space Elevator team to bring a psy stage back to Burning Man.

Gatto discovered psychedelic trance first at the Burning Man festival in 2001 and began attending underground psy parties in Los Angeles the following year. After the many ecstatic and transformational experiences he had while dancing to LA’s psy DJs and international acts coming through town, he decided to become a DJ himself with the intention of creating similar kinds of experiences for others. He has an extensive collection of music, a very keen ear for track selection, top notch ability to mix music together harmonically, structurally and emotionally, and an intuitive ability to perceive the crowd. He doesn’t prepare his sets in advance, so he offers a unique and dynamic dance floor experience tailored to the moment, focusing on taking the dance floor through a journey whose direction is guided by both himself and his audience. His gigs cover a lot of terrain including black rock desert, the mojave, the mountains of California, various beach and outdoor locations, underground and club events, and has played abroad in Mexico, Europe and central Asia.

Jeremy Green (Jagno Gaia) works with Bobby Ognyanov (Los Angeles, CA) via the internet to produce unique Goa tracks under the alias ‘Aerosis’ for Suntrip Records, an international Psytrance and Goa Trance record label. Recently, Jeremy has teamed up with Josh Stahnke (Optic Mind) to spread positive vibes and cultural awareness via small Psytrance events in Duluth, MN, and Woodbury, MN. The music of Jagno Gaia speaks for itself, enlightening any fortunate listeners with multi-layered, three-dimensional, new-age Goa melodies that are sure to melt your mind. We are all in for a special morning treat, as Jagno Gaia takes us on a truly unique Goa experience!

The Primordial Ooze project was created by DJ’s Kaiser Soze and S.O.T. Flowing sounds that seem to bubble and evolve like primitive life forms. These bundles of frequencies collaborate in a swarm like manner, creating intelligent patterns and movement. The Ooze sound creates a unique twist on the ever changing sound of psychedelic music.

GoD is a collaborative effort between two brothers, PsiloPsyBen and Saeros, who strive to bring you the darkest beats in Psytrance. The darkness that flows from the speakers will consume you, taking you to the depths of your mind, twisting it until your ego falls into the primal nature of Id. Super-ego has no place here and GoD wishes to bring you to the depths of your psyche.

PakaPaka LightShow– Psymbolic, Milwaukee WI
Near the turn of the last century, video manipulation and montage in real time became possible on a desktop computer, opening up a new world of expression. PakaPaka Lightshow was founded by Jerome Fortier, Reuben Fortier, and Dale Kaminski, a trio of artists devoted to exploring this new media. Jerome and Dale saw that their decades of experience in creating analog psychedelic lightshows could be leveraged with digital computers rather than overhead, aldis, slide, and 16mm projectors. PakaPaka Lightshow congealed organically through contemplation on how to provide visuals for a “historical cabaret” theatrical piece about the culture and happenings of 1968. This unique event led to the opening of many strange and exciting paths and PakaPaka continues to wander them. With every performance, PakaPaka provides a new stream of optical amusements, empathically bonded to the vibration of the moment. PakaPaka Lightshow’s live video performance and multimedia explorations are represented via the label known as Psymbolic.