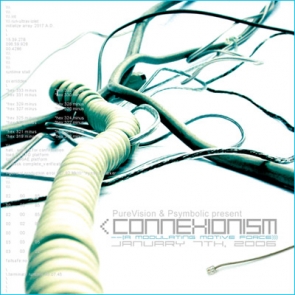 http://www.psymbolic.com/transmit/bluetech_forum.jpg
~ Bluetech (live) – Aleph Zero (http://www.aleph-zero.info) / Native State (http://www.nativestaterecords.com) /www.bluetechonline.com(http://www.bluetechonline.com) – (Vancouver, Canada) ~
A classically trained pianist & master of the art of software production. Bluetech?s love
of the melodic & exquisite sense of sound design makes him one of the most ingenius
producers today. While encompassing musical touches from different parts of the globe,
he presents a total blend, crossing genres & borders. He has the uncanny ability to
extract ethereal concepts from his imagination & solidify them into crystalline digital
sounds. Bluetech has established an international reputation for bringing a high energy
charge to downtempo music. He’s already performed all around Europe, Canada, Japan,
Mexico & now we welcome him for his debut Chicago performance.

“It’s music that moves you from one state of being into another, I try to capture the
essence of that “something other” in the world, whatever that is for each listener, that
element of the fantastic that underlies normal reality that peers through in dreams.” – Bluetech

http://www.psymbolic.com/transmit/init_string_forum.jpg
~ Init String (live) –www.initstring.org(http://www.initstring.org) – (Dallas, TX) ~
This psychedelic trio from Texas will bombard your senses from deep within the machine. Widely
known for their live drumming & emphasis on electronically manipulated tribal beats from the
netherworld. They definitely know how to move & please large crowds. With all the amazing
feedback they received from their live performances at the GeoLogic Cave Festival & the
August PureVision launch with Astral Projection, we thought it was due time to bring them back.
They’ll be delivering a fresh palette of full-on-funky-melodic-Psy.

http://www.psymbolic.com/transmit/kaiser_soze_forum.jpg
~ Kaiser Soze – Chilluminati (http://www.chilluminati.org) / Touch Samadhi (http://www.touchsamadhi.com) (Milwaukee, WI) ~
Kaiser Soze first discovered the midwest electronic music scene in 1996 & was immediately
attracted to the more acidic styles of Techno & Trance. Fascinated by electronic music &
the manipulation of audio, he is an avid fan of Psytrance & IDM and is always seeking unique
rhythms & sounds. By expanding his music collection, perfecting his track selection
& mixing skills, Kaiser has become one of the leading Psytrance DJ’s in the Midwest. Now a
driving force behind the Chilluminati & T.O.U.C.H Samadhi collectives, it’s his goal to spread
the sound & vibe that he has so deeply been inspired by.

http://www.psymbolic.com/transmit/chris_widman_forum.jpg
~ Chris Widman – wluw 88.7 abstract science (http://www.abstractscience.net) – (Chicago, IL) ~
In a world where DJs are pigeonholed by genre, Chris Widman defies easy classification.
His cohesive sets take on a life of their own as hidden gems from disparate genres &
eras are seamlessly intertwined. The effect is sometimes contemplative, at other times
exuberant; but always focusing on combining rhythms, breaking new sounds & forming
musical connections. Widman’s main focus has been his long running radio program
“Abstract Science” which airs every Thursday 10pm-2am CST on WLUW-Chicago 88.7FM.

http://www.psymbolic.com/transmit/psymbolic_eyes_forum.jpg
~ Psymbolic Visual Communications – Live Interactive Visuals
www.psymbolic.com (http://www.psymbolic.com)
Over the summer, Psymbolic established itself as the staple source of visual projections at
nightclub events & outdoor festivals in the Midwest. Psymbolic has been in Chicago for only
one year & in that time has made a name for themselves as major event producers
& visual artists. Internationally recognized for their art, the duo performs live projections
composed of theme orientated video loops, which they personally shoot, edit, & effect.
They use customized realtime visual software & hardware to synch their video loops,
camera inputs & effects to the beat of the live music.

Tune In & Hear the music from some of the headlining musicians…
Airing from Dec. 27th on through the Event